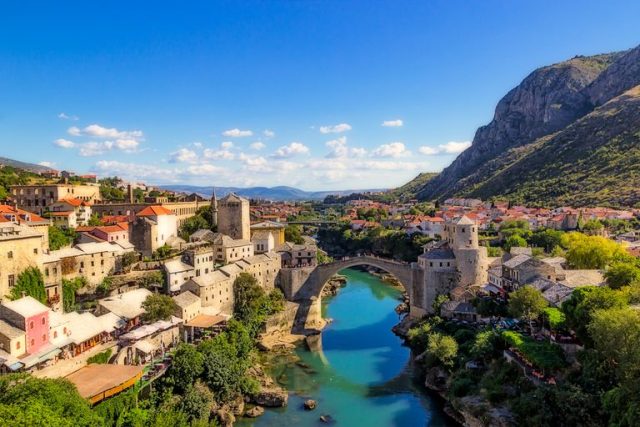 The first inhabitants of BiH that we know about were ILIRI. It is an ancient nation of Indo-European origin whose presence on the territory of BiH has been confirmed even in the 2nd millennium BC. They inhabited almost all the Balkan Peninsula. Another Balkan country that is specific in the mix of traditions, religions, cultures, unspoiled nature and special tastes. It is located between Serbia, Montenegro and Croatia and has a very rich historical heritage.

Bosnia and Herzegovina is perhaps the most intriguing country in the Balkans where the East and West intertwine. She was born under the auspices of Ottoman and Austro-Hungarian history, and filtered through the Yugoslav footprints. It’s true that this country continue to be remembered through a mild event from the beginning of the 20th century, when perhaps the most famous assassination, that marked the beginning of the First World War, happened in the very center of Sarajevo. Nevertheless, today’s tourists experience this country through the warmth of it’s hosts, beautiful mountains, numerous medieval ruins, unusual rivers, impressive waterfalls and caves. Everything in this country is unusual – from the stunning river Una to the snowy peaks of the Dinaric mountains – the beauty of nature is extremely rich. The architecture of the country itself is created under the influence of many styles, such as Roman, Byzantine, Slovenian and Ottoman. The combination of tradition and modernity, but also a perfect harmony with nature, is what reflects the landscape of BiH.

Bosnia and Herzegovina is a long name for a country that extends to just over 50,000 km2. Bosnia covers the northern and central part of the country, whose name probably comes from the word ‘bosan’, an old Indo-European word that means water. The southern part of the Antique Hum, ruled by Herceg Stjepan (Prince Stjepan), was later proclaimed Herzegovina, after the conquest of the Ottoman Empire. We invite you to get to know us with the history, culture and hidden treasures of this country, as well as to enjoy great specialties that will make you happy to come back again.

Although a relatively small country, Bosnia and Herzegovina has a rich culture that has had a great impact on other Balkan countries, and in some cases the whole world. It was featured in various fields of human activity, including music, literature, film, art and applied art, and design and contemporary media.

Bosnia and Herzegovina is next to Hungary, the only country in the region that has given more than one winner of the prestigious Nobel Prize.

The capital of Sarajevo hosted the 14th Winter Olympic Games, which was not only the gathering of young athletes from all over the world, but also the games of culture, peace and friendship.

Sarajevo is the main and largest city – the economic, university and cultural center of Bosnia and Herzegovina. It is located right next to the slopes of Trebević Mountain, while the famous Miljacka River passes through the city.

Have you heard about the Bosnian Valley of the Pyramid? Let us introduce you to these unusual buildings located in Visoko just 30 kilometers from Sarajevo (capital of BiH). Bioenergy pyramids, discovered in 2005, have incredible similarities to the Egyptian pyramids. The Visočica Hill, or as it is still called the “Pyramid of the Sun”, remained known for centuries as a hill of kings, because in the Middle Ages on its top there was a royal city.

In addition to cultural and historical sights, visitors to Bosnia and Herzegovina will surely like the Bosnian cuisine, which is heavily influenced by the 500-year Ottoman rule. Bosnian cuisine includes authentic customs of easy preparation and consumption of food, harmonized with the influences of the West and the East. Bosnian cuisine is similar to Turkish, Greek and other Mediterranean cuisines.

Spices are used in Bosnian cuisine, but in moderate quantities. Most Bosnian dishes are light, because they are prepared with plenty of water. The sauces are completely natural and contain plenty of vegetable juices. The typical ingredients of the Bosnian dishes are tomatoes, potatoes, onions, garlic, peppers, mushrooms, cucumbers, carrots, cabbage, mushrooms, spinach, zucchini, dried and fresh grains, plums, milk and sour cream.

Typical Bosnian meat dishes are usually prepared from beef and lamb. In most cases pork in Bosnia and Herzegovina is used by the Christian population. So it’s not a  good idea to go through Bosnia or to get out of it, and not try top-quality delicious kebabs or desirable Bosnian pies or burek, freshly baked under the bun in an iron pan, in one of the many bakeries around the country. The inhabitants of Bosnia and Herzegovina love and eat meat very often, which comes fresh and top quality from the mountainous regions, and the visitors immediately feel the difference.

Bosnian coffee is widely known for its specific way of serving. Along with the coffee, Bosnians serve a glass of water, as well as a traditional sweets. You will often see that people change the sugar with those sweets. It’s not entirely wrong, but it can offend the host, just as much as you can insult him to drink water right after the coffee.